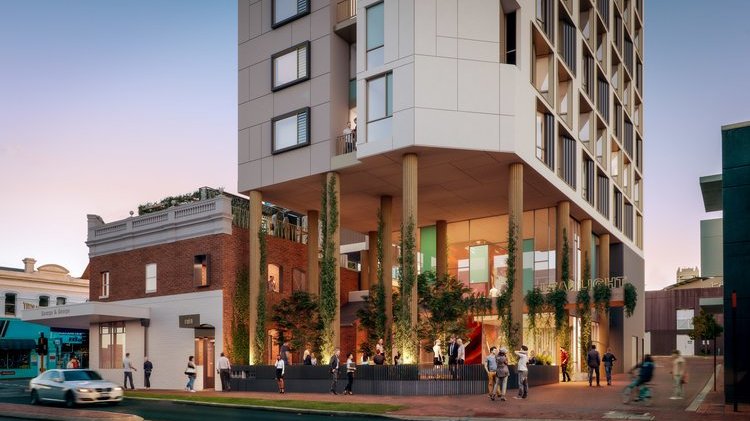 Western Australia is joining the timber trend sweeping the eastern seaboard with its first timber-framed building, a 10-storey hotel at inner city Northbridge.

The $14 million “Leadlight” hotel on the corner of Beaufort and Newcastle streets being developed by Adam Zorzi and Rod Hamersley’s Australian Development Capital has got the green light to build what will be one of the largest timber structures in Australia.

The plans include restoration of a heritage-listed, five-shop brick and iron building that was built in 1903 and has sat unused for 25 years.

Plans for the mixed-used development chopped and changed substantially throughout the Metropolitan re-Development Authority’s development application process, with the location of the site above the Northbridge tunnel posing a key challenge.

The building’s proponents, including Perth-based Klopper and Davis architects and Hera Engineering, landed on the use of lightweight mass timber to allow the tower to be built above the usual three-storey height restriction.

That timber framing is significantly lighter than concrete and steel framing is not the only reason the material was selected, Klopper and Davis’ director Sam Klopper said.

Mr Klopper said that building sustainably is a primary focus for the Perth-based architects, who are looking for opportunities to appeal to the “noisey” green building market.

As well as using locally-sourced timber – a hybrid of cross-laminated timber (CLT) and laminated veneer lumber – other sustainability features of the Leadlight plans include targeting a 5 star Green Star rating, and leveraging natural ventilation and lighting, where possible.

The fact that the plans involve reviving an unused heritage building also has a “sustainable element” that appeals to the broader community.

Mr Klopper also said that the hotel operators hope to attract a “young, edgy crowd” as their core client base, who are likely to have an interest in sustainable design.

He said that although much of the timber frame is concealed by cement sheeted cladding for fire-proofing reasons, some sections will be exposed to ensure the building’s green credentials don’t go unnoticed.

Using timber is not yet an inexpensive way to build, said Mr Klopper, but the design choice is intended to generate savings in the long run.

The cost of building engineered timber structures is likely to drop as the market matures in WA, which may take time due to the local construction industry’s close affinity with brick, he said.