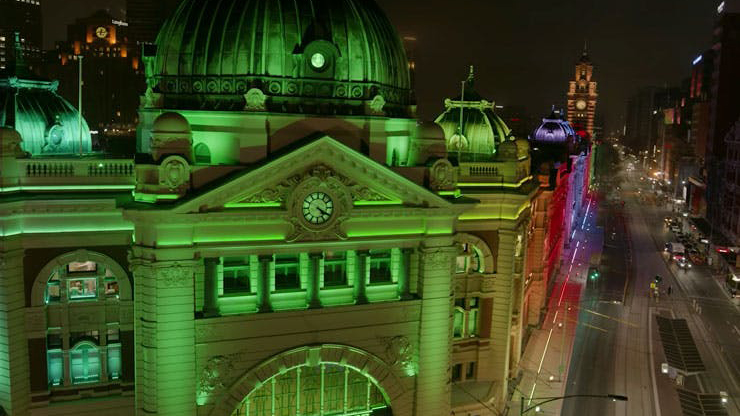 Victorians will see Flinders Street Station in a whole new light following the unveiling of a new state of the art LED lighting system.

Installed as part of the $100m upgrade of the station, the cutting-edge system can turn the station any colour and can run spectacular light shows for major events and celebrations.

The carefully positioned lights will show off the building’s exterior decorations, creating depth by using different light intensity and shadows.

The 1100 lights are connected through more than 20 kilometres of cable that allows the system to be completely automated and controlled remotely.

Each of the lights is networked through its own internal microprocessor making Australia’s oldest station also its most technologically advanced, with it being the first time this system has been used on a heritage building in Australia.

The lights were designed to respect the Station’s heritage with each light precisely colour matched, with a custom made amber LED that replicates the colour of the original flood lights.

The LED system is cheaper to operate than the old floodlights as well, using only a third of the energy despite having 600 more lights.

The lights are the brainchild of Melbourne company APEC Electrical and their supplier Darkon who brought together a team of sixty designers, programmers and technicians to create the system.

The launch of the light system completes the restoration of the station’s exterior which has seen the repainting of the building in its original colours; the leaking roof fixed; and the clock tower and dome interiors restored.

Upgrade works continue around the station, increasing space and seating for passengers and the restoration of the Elizabeth and Degraves Street subways and main ticket hall.

The project has already completed works to make the station safer with extra myki gates, an additional entrance, improved lighting and an upgraded CCTV system.

The $100 million Flinders Street Station Upgrade project is protecting the station’s beloved heritage features and improving the amenity for the 200,000 Victorians who use it each day.