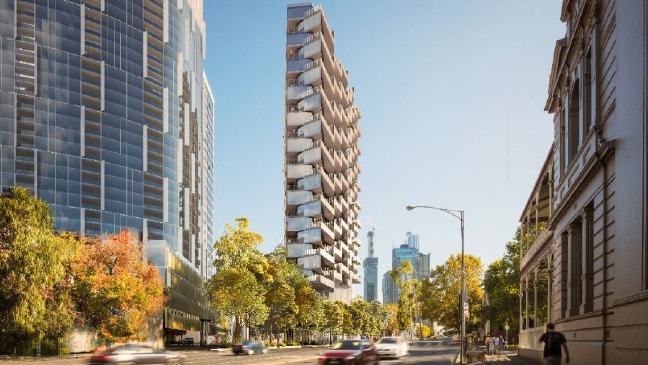 Melbourne’s last CBD petrol station will give way to a 20-storey apartment tower set to look out to Melbourne’s Carlton Gardens.

Instead of petrol bowsers, motorists driving along the CBD’s northern edge will see trees and greenery, with the development at 23-29 Victoria St to be a part of the City of Melbourne’s Urban Forest Strategy.

In addition to the greenery, the $150 million project is set to house 70 apartments, as well as a mix of commercial and hospitality space on its lower levels.

Developers Perri Projects and Wingate Property have branded the site as significant and believe it will be an important part of the city skyline once complete.

Perri Projects managing director David Scalzo said there was a sense of symbology that the CBD’s last petrol bowsers would disappear in favour of a tree-lined boulevard designed for pedestrian enjoyment. Though the specifics of this were still being finalised with a variety of stakeholders.

“A building on a prominent site needs a pretty well thought out and diverse design idea, it’s got to be about more than what it looks like from a long distance,” Mr Scalzo said.

“And that’s why we have put in the level of thought to the boulevard and street use.”

City of Melbourne planning portfolio chairman councillor Nicholas Reece said that according to city records, the property was the last petrol station in Melbourne’s CBD.

“Motorists should think about filling up at the numerous service centres on the way to the city, or better still, catch public transport,” Cr Reece said.

The planned transformation had been carefully considered, he added.

“Adjoining a significant world heritage listed area, this development will provide a positive addition to the north edge of the CBD,” Cr Reece said.

The design by Woods Baggot architects had received input from London and New York, but would be unique to Melbourne with the street level aspects reflecting the brickwork of nearby Trades Hall, and the architecture of the upper levels taking inspiration from the strong framing seen in terrace houses in Carlton.

“Working with a global team of architects will ensure our Carlton Gardens project will reflect the complex cultural fabric of the suburb and deliver an impressive architectural addition to the neighbourhood,” Mr Scalzo said.

“The significance of the site is undeniable and heavily guided our design approach to remain congruent with Carlton’s urban language.”

Victorian Automotive Chamber of Commerce executive director Geoff Gwilym said he believed the Victoria St petrol station was the last in the CBD.

“Land values in the CBD and CBD-fringe have risen steeply in recent years, which means that owners of service station sites now have extremely valuable assets,” Mr Gwilym said.

“Naturally enough, some of these owners are now capitalising on their assets.

“(And) the high price of acquiring or developing a suitable site for fuel retailing is prohibitive for other business operators wishing to come in and replace them. That means that there is a net loss of sites.”

The high cost of land tax, a rising number of CBD apartment dwellers who did not own a car, and the rise of car sharing models had lead to neighbourhood service stations becoming increasingly scarce, he added.

“It is an important first step in bringing to life this visionary building which we believe will become iconic on the Melbourne skyline.”