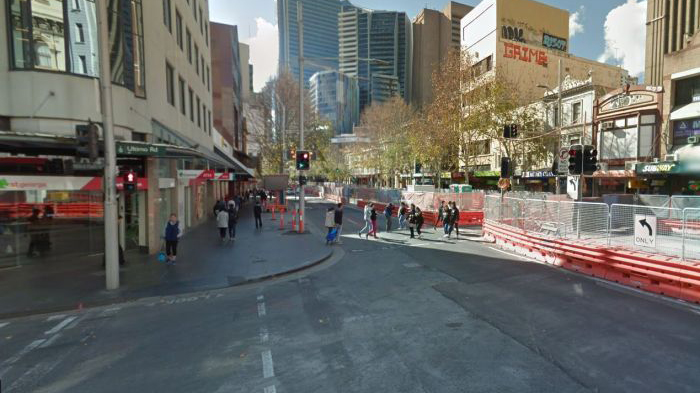 A 15-year-old girl has been hospitalised after suffering an electric shock while walking near an “exposed wire” at the light rail construction in Sydney’s CBD.

Anna Lambden had been at lunch with friends on Sunday when she took off her uncomfortable high heels and walked towards the train station in wet socks.

As she waited at the intersection of George Street and Ultimo Road near Haymarket, she felt a sudden shock which felt like pins and needles coursing through her.

“She felt it started at her legs and then it travelled upwards,” her mother Viola Morris said.

“She was screaming out and then she dropped into the foetal position with her legs tucked up next to her.”

Ms Morris said several passers-by tried to help but as they tried to touch her they also received shocks.

An ambulance was called and Anna was taken to Royal Prince Alfred Hospital when doctors told her that her injuries were “consistent with an industrial amount of electricity”, Ms Morris said.

“She’s really shaken by the whole thing because she thought that she was going to die yesterday.”

Ms Morris said doctors told her the fact that her daughter survived the initial shock indicated that there would be no lasting impact from the incident.

Tony Braxton-Smith from Transport for NSW said the site where the incident happened had been made safe.

“We’ve had a crew out there to make sure that electrically the site is now safe. We’re now turning our attention to what was the cause. We’ve established that there were actually a couple of different projects in the area.

He said the State Government had made contact with the girl’s family.

“Several people have been in touch … with the family just offering … first of all our apologies and then our support. We’ll be making further contact today just to check-in on how things are going with them.”

“I’m devastated. The idea that a child can’t walk the streets of Sydney without fear of electrocution is overwhelming to me,” Ms Morris said.

“She’s just 15 years old … she’s a really nice kid and she was just innocently trying to walk to the train station and she just got struck — it’s awful.”

Ms Morris said she was worried a similar incident could happen again.

“I think the fact that this has occurred shows that there’s been gross negligence on the part of the provider of the light rail service,” she said.

“The fact that there’s been so little follow up and I’ve had to initiate it to get to this process is incredibly disappointing.”