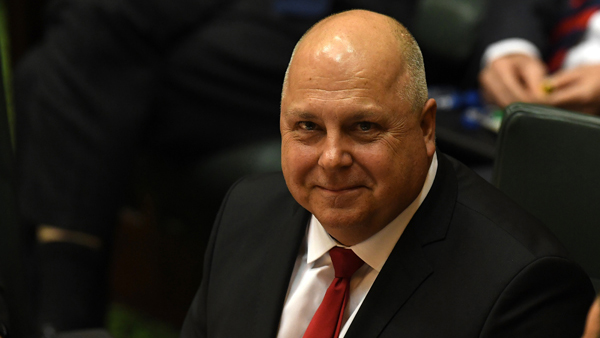 The state government will spend $13.7 billion on roads, railways and other infrastructure around Victoria in just 12 months in an unprecedented election-year building blitz.

Treasurer Tim Pallas will unveil the spending plans in Tuesday’s state budget, which will also show the state will be $1.4 billion in the black in the coming financial year, with massive average annual budget surpluses of $2.5 billion predicted for the next four years.

Mr Pallas says the record infrastructure spending in the 2018-2019 financial year is no one-off, with the budget papers to be published on Tuesday forecasting average annual spending of more than $10 billion for the next four years.

The spending reflects the massive works program underway on roads, public transport and other projects as the government races to keep pace with Melbourne’s population boom and congestion headaches.

Mr Pallas said a nation-leading jobs boom, driving strong retail spending and high consumer confidence, had helped to underpin his “beautiful set of numbers”, which gives his party – and the opposition – a huge war chest to fund promises for November’s state election.

The coming $13.7 billion 12-month building blitz easily erases the previous record infrastructure spend by a state government in one year, the $5.8 billion spent on building work in the 2015-2016 financial year, and nearly triples the 10-year average spend of $4.9 billion.

The numbers for the 2016-2017 financial year have not been finalised but the infrastructure spend for those 12 months is estimated to be approaching $12 billion.

Mr Pallas said the government was reacting to a sustained period of population growth, particularly in Melbourne, but was approaching the limits of what was possible to spend on building work in a single year.

“There is an imperative that we do more, but it’s a little hard to imagine that we could do more than spend $13.7 billion,” the Treasurer said.

“I accept that we’re not perfect but we’re doing a heck of a lot more than any other government in the history of this state.”

Mr Pallas said the state’s jobs boom was to be “the big story of this budget”; putting money in the pockets of consumers, fuelling strong spending in the state’s retail, real estate and service sectors, and filling the Treasury’s coffers.

“We’re leading the nation in terms of retail spending; consumer confidence is high, [and] our services sector is very strong and a very substantial contributor to the state’s wealth,” Mr Pallas said.

“We’ve seen over 330,000 jobs created in the three-and-a-bit years that we’ve been in government and that’s more jobs than any other state either in either percentage or absolute terms.”

Treasury says the state’s economy has grown by about 3.3 percent this financial year, well above the national average of 2 percent, and predicts that growth will remain at a strong annual average of 2.75 percent for the next four years.

Mr Pallas said the main potential threats to the state’s economy were external; namely, a national economic downturn or an international shock like a trade war between the US and China affecting global trade.

“We’re nervous about the implications of a trade war and that’s something we have to watch,” the Treasurer said.

A cooling local property market was also a risk to state revenue, which is heavily dependent on stamp duty and other taxes, with transfer charges alone bringing in more than $6 billion this financial year.

But Mr Pallas said Treasury had factored those risks into its economic forecasts.

“Our budget position isn’t assuming the historic large growth that we’ve had, in terms of volume and price, going forward.”