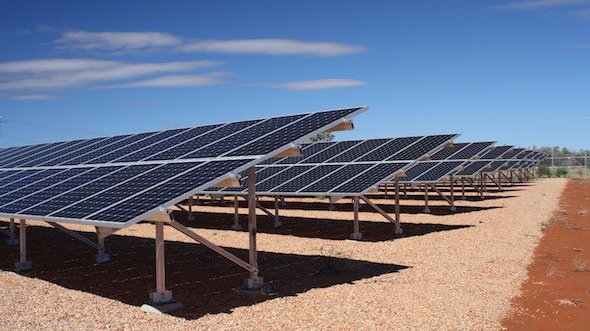 Hundreds of South Australian jobs will be created and thousands of homes powered with the construction of a $450m solar power project near Robertstown in the Mid North.

Stage one construction of one of the state’s largest solar power ventures – Solar River Project – will begin in 2019 featuring a 200mW solar photovoltaic (PV) array and 120mW battery.

The first stage also includes a 35km-long transmission line to the national grid, delivering power to at least 90,000 Australian homes.

The man behind the project is passionate South Australian Jason May and business partner Richard Winter, who is a lawyer based in Perth.

“It’s certainly the start of something very big in the energy sector for SA,” he says.

“We’ve been chipping away at it, photovoltaics have been a little bit expensive but they’re coming down. There is a boom in the energy sector at the moment.”

Jason says about 350 jobs will be created during the two years of construction, including a further 20-50 permanent positions throughout the 25-year life of the facility, by way of engineering roles and project managers.

“The contractor has agreed to source as much of that (construction jobs) locally as they can, so that means everything from labourers to plant operators will come from that whole region,” he says.

Stage two construction will commence in the fourth quarter of 2019 and will include an additional 200mW with a 150mWh battery.

Jason says the State Government’s proposed electricity interconnector with NSW could unlock potential for future stages of Solar River to supply power to 450,000 homes across the country.

“That (interconnector) is very exciting for the industry, but also the region because it unlocks 1200mW of connection … billions of dollars’ worth of investment will go ahead as a result of that interconnector,” he says.

Jason has more than 35 years working in the energy sector, both nationally and internationally.

He says the idea for a renewables project had been on his mind since 2002, a time when he was working as a senior project manager at ElectraNet.

Jason met Richard Winter in Sydney about a decade ago when the pair was working on renewable projects at bank Investec.

They became mates, eventually travelling to the Mid North and following Goyder’s Line until they found the perfect location for a solar farm that was close to the national grid.

Solar River Project is being run out of the University of Adelaide’s ThincLab on North Terrace by a team of 40 people including university graduates.

“When you think what resources does SA have … we have tonnes of solar and tonnes of wind, let’s build plants here that harness that energy, connect to the grid and sell that to the eastern seaboard,” he says.

Solar River Project is privately funded through a mix of national and international investment and has received state development approval and backing from the Goyder Council.

Local flora and fauna protection programs will also go ahead, as will sponsorship of local sporting teams and facilities.

The May family name is well-known in SA, with Jason’s forebears Frederick and Alfred May founding engineering and manufacturing firm May Brothers & Co in Gawler in 1885.

Frederick is remembered as a “mechanical genius” and one of Australia’s greatest engineers, with a plaque installed on North Terrace in Adelaide.

Jason went on to reinstate the May Brothers name and has since lead a number of energy projects.

He says SA’s big renewable projects such as Tesla’s big battery in the Mid North has put the global spotlight on SA.

“SA is the far most progressive out of all the states when you look at all the statistics coming out of AEMO (Australian Energy Market Operator),” he says.

“Let’s step it up and take it to the next level.”