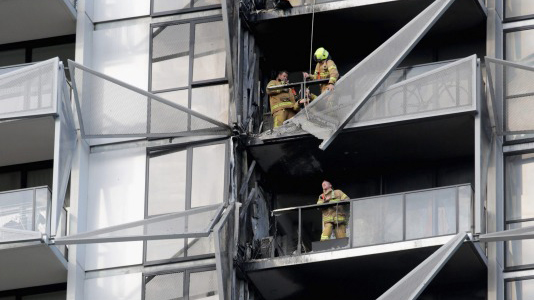 Slater and Gordon is considering a  class action on behalf of owners and residents of apartments in Victoria with flammable external cladding. The law firm is already involved in more than 25 class actions in a range of other sectors, including against AMP.

Earlier this month a separate suit was announced, seeking participants in a $4.2 billion class action on behalf of apartment owners and residents.

Phil Dwyer, national president of the Builders’ Collective of Australia, a lobby group to improve buildings standards and regulations, said additional class actions are being considered for other defective work by developers and builders.

“Dangerous cladding has been used on buildings without fear of any punishment by regulators,” Mr Dwyer said.

Law firm Adley Burstyner and Roscon Property Services is preparing the first round of legal actions on behalf of Victorian owners, which is expected to roll on to NSW, non-residential buildings, then other states and territories.

Both law firms are seeking registrations of interest to establish whether there is enough backing to make the actions worthwhile.

They warn that many apartment owners, who each face between $20,000 and $40,000 in repair bills, are under financial pressure to complete the repairs, particularly elderly and first time home buyers.

A Slater and Gordon spokesman said it is considering a range of options.

Fears about the dangers of flammable cladding have increased since last year’s Grenfell Tower fire in London that killed 70 and injured another 70.

In Melbourne, a fire in 2014 raced up 13 floors of the Lacrosse building in Docklands in about 10 minutes, leading to the evacuation of more than 450 people.

Apartment owners are fighting LU Simon over who should pay the costs of replacing the cladding in the Victorian Civil & Administrative Tribunal in a case due to start in September. It is unclear how the class action bid will be affected by this case.

Adley Burstyner estimate a class action seeking rectification and compensation for losses caused by defective cladding could take one to three years.

It is considering no-win, no-fee payment to secure outcomes for the owners’ corporation without need for a special resolution with a 75 per cent majority which is difficult to achieve because of detached and passive investors.

NSW has identified 1000 buildings with potentially dangerous combustible cladding, and Victoria has drawn up a list of 1400.