‘Self-healing’ concrete substitute sucks carbon out of the air 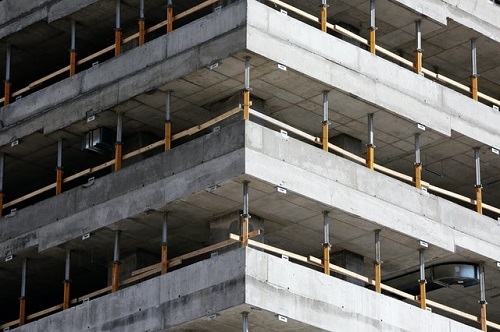 ECM is made of carbonic anhydrase, an enzyme found in living cells. When it connects with CO2, it creates calcium carbonate crystals, ECM’s primary component. Other ingredients of the new mixture include sand slurry and polymer, a binding agent. The result is a material that can remove greenhouse CO2 from the air and safely store it, Scarlata and Rahbar said.

While concrete produces 400 lbs of CO2 per cubic yard, ECM holds about 18 lbs of CO2. In addition, the ECM recycling process is far less energy-consuming than concrete, the researchers said.

While there are other types of alternatives that use bacteria instead of enzymes, they are not as strong as ECM, the researchers said, and the risks of bacteria are unknown.

Concrete: ubiquitous but harsh on the planet

Concrete is the most widely used substance on the planet after water, according to The Guardian, and is quite literally the foundation for modern building. However, there is a massive environmental cost to the material, both from the energy expended in its creation and from how it endures after it’s no longer in use.

Cement use and production accounts for about 8% of global CO2 emissions, according to a 2019 study from the National Academy of Sciences. An alternative building material like ECM could go a long way towards enabling a sustainable construction industry, according to the researchers.

“Although cement is not very expensive, energetically it’s very expensive,” Rahbar said, and it takes a lot of fuel to add the ingredients that make concrete. “Also concrete doesn’t recycle, so when you make stuff it’s just there. In fact, you have to spend extra energy to grind it and make it smaller.”