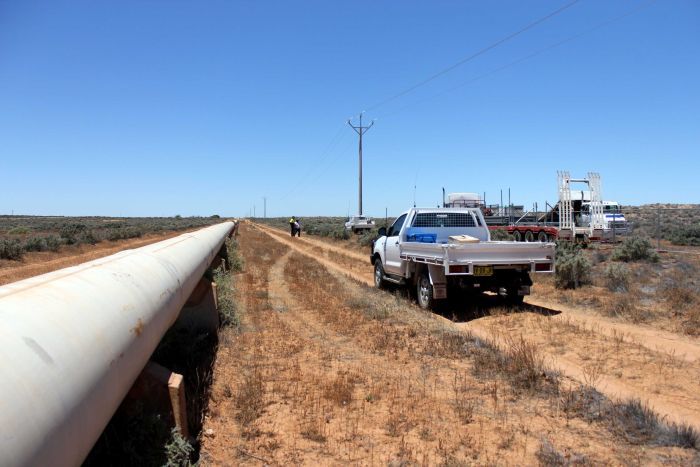 Construction of the Broken Hill water supply pipeline has been awarded to Australian engineering contractor John Holland, set for completion by the end of 2018.

John Holland will build the 270 kilometre water link in joint venture with pipeline construction company MPC Group at a total cost of $467 million, under the budgeted $500m cost estimate.

NSW Minister for Regional Water Niall Blair today announced what he called a game-changing piece of water infrastructure and a win for Australian steel.

“The people of Broken Hill have just as much right to a safe and reliable supply of water as anyone else across the state and we’re determined to deliver it to them,” Mr Blair said.

“The government is picking up the tab for $467m and the business case absolutely makes sense.”

Water will be drawn from Wentworth on the Murray River and follow the Silver City Highway North to Broken Hill (population 18,000). It will pump up to 37 megalitres a day.

The town’s population of 18,000 needs about 6 gigalitres a year. The pipeline is regional NSW’s largest community water supply project.

The pipeline would not only secure drinking water, which is currently sourced from the Menindee Lakes system (managed by both State and Commonwealth), it could stop the Murray Darling Basin Authority conducting another round of unpopular water buybacks.

The Minister directed Water NSW to require construction from Australian steel. Pipelines can be constructed from imported synthetic material.

“We’ll be shipping steel back to the home of BHP,” Mr Blair said.

Onesteel at Port Kembla is already rolling steel for the project.

The project workforce is expected to peak at 500, injecting $50m into the Wentworth and Broken Hill economies and generating more than 150 local jobs. Construction will begin next year.

“The 270 km pipeline will be constructed substantially from steel rolled in Australia, strengthening the NSW Government’s position as the single largest domestic purchaser of Australian steel,” Mr Blair said.

“Releasing details of the project’s business case marks a commitment of this Government to provide timely information to the community on water projects going forward.”

Broken Hill residents have questioned if the cost of the pipeline’s operation and maintenance (contracted to New Holland’s JV for $107m) would be passed on to ratepayers.

“There is a strong argument against prices being wholly passed on to customers,” he said.

There has been widespread concern among Far Western NSW residents over how management changes at Menindee Lakes will impact flows below the lakes and along the Lower Darling.

Producers along the Lower Darling fear the pipeline will reduce Broken Hill’s reliance on water from the Darling River and argue increased extraction upstream may follow.

Mr Blair acknowledged that poor communication had contributed to negative perceptions of the project, but argued reduced evaporation from Menindee would improve downstream flows.

“There is no doubt there needs to be more work with communities along the system so they can better understand changes to operations and engineering works,” Mr Blair said.

Reducing Broken Hill’s reliance on inflows to the lakes enables NSW to re-engineer the lake system to push water through more quickly and reduce evaporation.

The water saved could contribute to the Sustainable Diversion Limit adjustment mechanism in the Basin Plan, which essentially allows states to swap buybacks for the water efficiencies achieved through new infrastructure, such as engineering works.

“There will be more water for longer, with better flow in the river as a result of decoupling Broken Hill’s supply from Menindee Lakes,” Mr Blair said.

Community engagement meetings with the Murray Darling Basin Authority and NSW Government water officials about these works at Menindee did not provide enough detail to local “and that is not good enough”.

“There needs to be better communication on the ground from the MDBA and from NSW government.”