Probuild and Watpac facing bans over CFMEU flags and posters 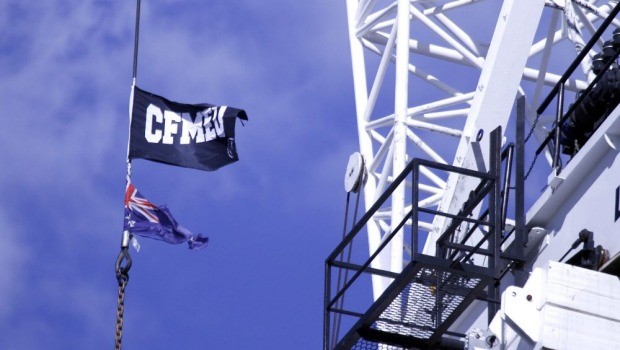 The building industry watchdog is considering sanctions against Watpac and Probuild that could see the tier-one contractors banned from bidding for Commonwealth-funded construction work.

The Australian Building and Construction Commission has alleged that the builders have too many Construction, Forestry, Mining and Energy Union flags and posters at their work sites, which it argues constitute coercion and are a breach of the federal building code.

Watpac CEO Martin Munro told The Australian Financial Review the company was “a fan” of the ABCC and the code but said “we do not believe we are in breach of the building code or were in breach at any point”.

“If we were, we don’t believe the breach was serious enough to warrant sanction,” he said.

Under the 2013 building code, introduced by Labor, it is unlawful to have union signs that say “no ticket, no start” because it restricts workers’ freedom to join or not join a union.

However, the government’s new code, introduced at the start of 2016, significantly increases the scope of what constitutes a breach of freedom of association.

The ABCC is understood to be arguing that the volume of CFMEU posters, flags, notices and banners at the Watpac and Probuild sites, rather than the content itself, is enough to constitute coercion under both codes.

Mr Munro said the issue was a “grey area” and the code was “not as clear as it should be”.

“The prevalence of a rostered day off calendar or a CFMEU safety sign – does that imply the site is promoting anything other than free choice? What if you have ten of them?”

He said the company had been “extremely consistent and vocal” in its opposition to unlawful behaviour in the building industry.

“But lawful behaviour is lawful – we’re not looking to overreach,” he said.

“The CFMEU is not outlawed or deregistered. They do represent a proportion of building workers who work for us in the industry and they have rights and obligations too.”

Former ABCC commissioner Nigel Hadgkiss told Senate estimates in May that he had advised three unnamed contractors of suspected breaches of the code, calling on them to “show cause” as to why he should not recommend sanctions against them to Employment Minister Michaelia Cash.

The matter was understood to be in the final stages in September before Mr Hadgkiss admitted he had breached the Fair Work Act by recklessly misrepresenting union rights, in part through misinformation in ABCC posters and flyers for employers. The breach resulted in his resignation.

A spokesman for the watchdog said “the ABCC does not comment on ongoing operational matters”.

Probuild also declined to comment but it is understood to be facing similar allegations over CFMEU posters, including ones boasting wage rises won by the union.

It is also facing additional claims relating to a CFMEU shop steward who allegedly pressured a subcontractor of another entity to sign a union agreement.

Senator Cash previously singled out Probuild in parliament for what she described as its “cartel-like behaviour” and history of “collaboration” with the CFMEU.

The minister will have the final say if the ABCC recommends any sanction, including choosing from formal warnings or bans from tendering for Commonwealth-funded projects for up to 12 months.

However, the decision would be subject to judicial review, with the minister’s “cartel” comments potentially making any sanctions against Probuild vulnerable to claims of apprehension of bias.

The minister delivered the first sanction under the code in April this year when she suspended Hutchinson Builders from tendering for three months because it allowed a “no ticket, no start” sign at its site and failed to notify a subcontractor it was subject to the code.