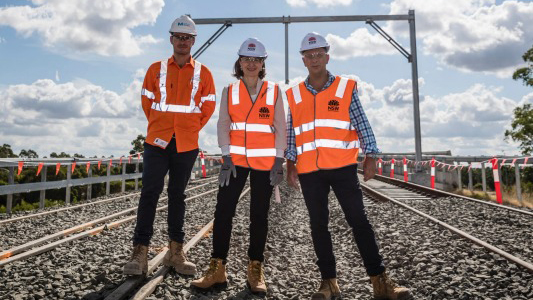 NSW is making the biggest overhaul in decades to the way it tenders for and delivers infrastructure projects to create a more “collaborative” relationship with contractors in response to billion-dollar contract disputes and high bidding costs, Premier Gladys Berejiklian will reveal today.

The Premier will outline a swath of changes to its tendering processes at the The Australian Financial Review’s National Infrastructure Summit in Sydney.

These include moving away from “fixed price, lump sum” procurement methods that have required projects like Sydney’s new light rail line along George Street to be delivered on a certain date and within a certain budget – or face hefty fines that often end up being disputed.

The light rail project, which is running a year late and is $1 billion over budget, has ended up in the NSW Supreme Court amid a bitter dispute between the government and the lead contractor, Spain’s Acciona, over who is responsible for unforeseen costs associated with moving utilities.

In an acknowledgment of the concerns raised by contractors, the Premier will say the state could not “do it alone” as it prepared for the next wave of projects.

“We need to work with industry to get the very best results in a changing market,” she will say on the second day of the two-day Summit.

The Premier, who is facing a state election in March 2019, will say that NSW will now procure and manage projects in “a more collaborative way” and take “a partnership approach” to managing risks as it recognises that not all risks are capable of being fully managed by the private sector.

The changes will be welcomed by contractors, who have been calling for a more collaborative approach from government amid complaints that current bidding processes are “too adversarial”.

Joe Barr, chief executive of construction group John Holland, told the Financial Review summit on Monday that government should not “push” risks like utilities and soil contamination on to the private sector because they were too difficult to assess accurately.

Mr Barr also said he was concerned about the high costs of bidding, with bids for “mega projects” costing tens of millions of dollars with contractors often only having a one-in-four chance of winning, and a lack of transparency on project selection.

As part of the chances the Premier will announce on Tuesday, the NSW government will now publish a “whole of government” pipeline at least every six months showing every project planned for the next three to five years.

It will improve standardisation of contract terms across projects and agencies, and will have no more than three bidders on shortlists for major projects.

The government expects the changes will reduce the cost of bidding, cut bureaucracy and streamline the bid approval process. Although the changes to bidding processes are too late for the George Street light rail project, they will apply to some parts of the new Sydney Metro as well as the North South Rail Line and the new Western Sydney Airport.

Arguing that the current NSW government had been “victims of our success” the Premier said the state’s infrastructure pipeline was putting pressure on labour, material and suppliers.

“We therefore need to put in place new measures that allow us to adjust to the changing external market,” she said. “Whereas in other states they seem to thrive on confrontation with business, here in NSW we are strong believers in collaboration.”

The NSW government says it has invested more than $100 billion in infrastructure since 2011, and plans another $80 billion of investment over the next four years.

The government says it has completed more than 430 of the projects identified as priorities seven years ago, with another 200 more projects now underway.

Contractors and investors warned at the Summit of the high costs of bidding for infrastructure projects, sharing the risks and competing against dominant players.

Deloitte Access Economics partner Chris Richardson warned the summit that the politics of infrastructure in Australia had become “toxic” and that Australia had failed to grasp the opportunities to invest more heavily during a golden period where interest rates were extremely low.

Contractors and investors warned at the Summit of the high costs of bidding for infrastructure projects, sharing the risks and competing against dominant players.

John Holland, which is hiring more than 100 people each month to build infrastructure around Australia, is worried about a shortage of project leaders as well as the supply of key materials like steel and tunnelling equipment as tens of billions of dollars of projects get underway. “The pressure is on in terms of resources,” said Mr Barr.

“Utilities or the contamination of soil are risks that by and large you don’t know,” he said. “We have to look at it sensibly and not just push the risk on to the private market.”

Mr Barr said he would welcome a more “open and transparent” approach to project selection, and reducing the number of bidders down from the three or four that is typical now to avoid wasting resources when tendering for projects. John Holland has 80 people working on a bid to build Brisbane’s Cross River Rail project, which is expected to take about six months.

IFM global head of infrastructure Kyle Mangini said that Australia, with Canada, led the world in using private funds to invest in infrastructure. IFM is among the bidders for a 51 per cent stake in Sydney’s $16.8 billion WestConnex road project.

Asked about the Australian Competition and Consumer Commission’s review of Transurban’s participation in the WestConnex bidding process, Mr Mangini noted that it was “much easier” for governments to extend concessions in exchange for approving new infrastructure projects rather than going out to a public tender.

“If you only have one party in the entire country that can do that, you are going to have a particular outcome,” he said.

“The position [the ACCC] has taken is that over the longer term, having two major operators is a better outcome for the state than having a single operator.”