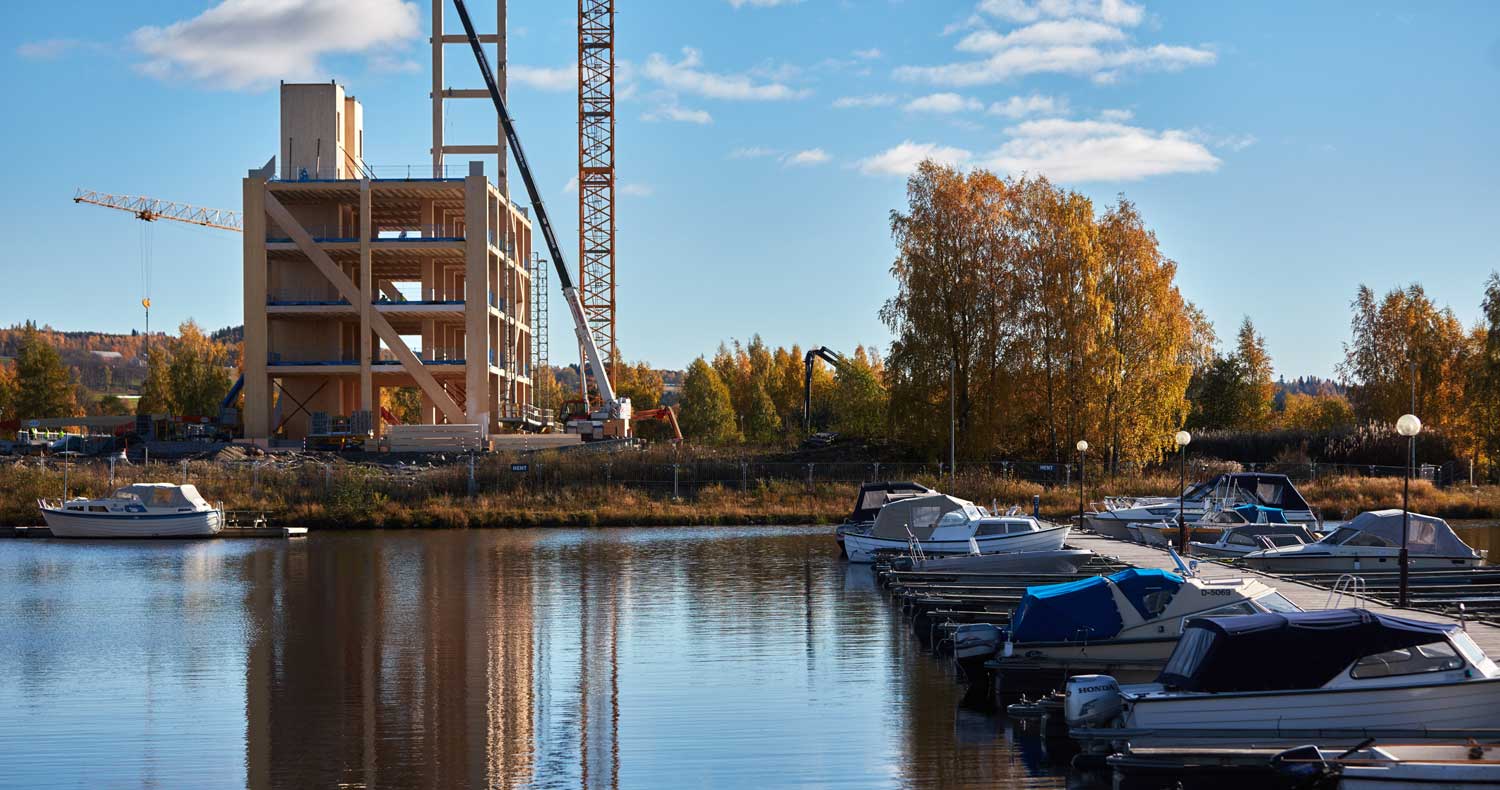 Norway is set to break records for tall-timber construction with a new structure in a town just north of Oslow. Mjøstårnet will be more than 80 metres tall – 30 metres higher than what is today considered the world’s tallest timber building.

The building is named after its neighbour and Norway’s largest lake, Mjøsa and will sit on the edge of the north-eastern tip of the lake in the small town of Brumunddal, an hour and a half’s drive north of Oslo.

Arthur Buchardt, investor and contracting client, has dubbed the construction “the closest we come to a skyscraper in timber” and believes “Mjøstårnet sets new standards for timber constructions”.

Spanning over 18 floors, the building will include apartments, an indoor swimming pool, hotel, offices, restaurant and communal areas with construction scheduled to be completed in December 2018.

Moelven, a Mjøsa-local Scandinavian industrial group, will supply the timber constructions from local spruce forests required to construct the tower and the swimming pool area.

“The assembly and construction of the Mjøstårnet is nothing short of world-class engineering, and will be managed without external scaffolding, despite the complexity of working at heights. We are primarily using cranes and supplementing with lifts as needed. We have reached 33 metres to date, meaning we have 48 metres to go,” said Buchardt.

Timber structures are becoming increasingly popular, not least for their eco-friendly credentials. “A project group established by Norwegian road authorities investigated the possibility of building the world’s longest timber bridge across Lake Mjøsa. Their studies show that building with wood instead of concrete can reduce CO2 emissions by up to 30 percent,” said Buchardt.

And we can expect to see ever more timber structures heading skywards in the years to come as Buchardt believes that the construction sector will continue to evolve in the footsteps of the automotive industry.

“In 15 years’ time I believe it will be illegal to produce and sell cars that run on fossil fuels. Similarly, I expect that climate-friendly materials will become an international statutory standard, ” says Buchardt.

“Through Mjøstårnet we demonstrate that it is possible to construct large, complex wooden buildings. The planned construction of the Norwegian Government quarter can become a wooden landmark internationally. I want to help convey an important message with this project. To build with wood is to contribute to the world breathing better.“

There are those who question the project’s claim to be the world’s tallest timber building, citing instead the HoHo-tower in Vienna, also currently under construction. Director Rune Abrahamsen of Moelven Limtre AS is quick to correct the misconception. “For a start, Hoho is not a timber building according to how the definition of this will be. It’s a wood-concrete-hybrid building – also known as a composite. Second, the building will not be completed until a month after “Mjøstårnet” is completed. But the latter is a moot point if the first is correct. And there is little doubt that this will be the case,” Abrahamsen said.

Abrahamsen presented at a workshop under the auspices of the Council On Tall Buildings and Urban Habitat (CTBUH) in October, held just before the Sydney CTBUH 2017 International Conference.  “Both at the workshop and in the conference there were discussions with experts from all over the world. The reason is that a lot of timber projects have claimed to be the world’s tallest, Europe’s largest and America’s tallest apartment building. Lacking rules, most can rightly make such claims, Abrahamsen says.

To this end, Dr Robert Foster, part of the expert group in Sydney, has tabled a proposal to the CTBUH steering committee to serve the basis of a clear international standard for what may be called a timber building. “According to this proposal, both “Treet” in Bergen and “Mjøstårnet” in Brumunddal will be defined as timber buildings, while buildings with supporting concrete cores – such as “HoHo” in Vienna and Brock Commons in Vancouver – will be defined as wood-concrete hybrid buildings – or composite buildings. Subsequently one may expect that Mjøstårnet will be named the world’s tallest timber building when completed,” Abrahamsen says.