NEXTDC to invest over $2b in data centres 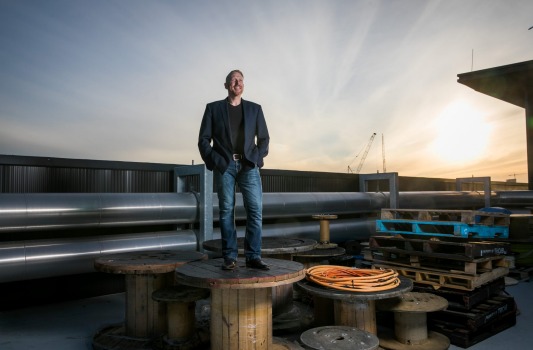 Data centre operator NEXTDC will invest $2.25 billion in its three new sites to prepare for an influx of data from the likes of drones, precision medicine and nanotechnology.

The purchase of new locations in Sydney, Melbourne and Perth has been funded by a range of equity and debt capital raisings amounting to more than $600 million. The large-scale projects are expected to provide jobs for up to 1000 construction workers.

NEXTDC chief executive Craig Scroggie told AFR Weekend the shift to the fourth industrial revolution would bring about huge opportunities for the company.

“There’s an incredible transition to all these exponential technologies … there’s just so much opportunity and we’re massively privileged to be in the eye of the storm … and be a builder of the key digital infrastructure for the economy,” he said.

Construction at NEXTDC’s new $20 million Perth site on Lord Street is about to kick off, with preparations getting under way this week.

Mr Scroggie said NEXTDC had also spent $90 million buying land near the Sydney CBD for its S3 site and was close to locking in a deal for its new Melbourne location.

“These are very, very large scale and materially larger than anything we’ve ever bought before,” he said.

“Our M1 site in Melbourne was 15 megawatts and cost $250 million to build. Now we’re building, that’s more than four times the size of that.”

In the full year ended June 30, NEXTDC’s revenue rose 31 per cent to $161.5 million, while statutory net profit after tax fell to $6.6 million from $23 million in the previous corresponding period. The company’s 2017 financial year NPAT included a $10.2 million income tax benefit.

The revenue result exceeded the company’s guidance, which it had already increased at its half year results in February.

The business also beat its underlying earnings before interest, tax, depreciation and amortisation forecast of $80-62 million, recording EBITDA of $62.6 million.

The investment in the new data centres will bring its total to 11 across Brisbane, Canberra, Sydney, Melbourne and Perth. The new centres will also be built to meet Tier IV certification standards, meaning they will have the highest security rating possible and will also have “gold certification” from the Uptime Institute for operational sustainability.

In the last year, the company has increased its number of customers by 26 per cent to 972, while its contracted utilisation of its data centre capacity jumped 28 per cent to 40.2 megawatts.

Investors can expect to see a range of new deals from  NEXTDC in the next 12 months, with the business signalling that it is in “advanced negotiations” with a number of large potential customers.

“We’re seeing very strong growth in not only the cloud platforms, but strong acceleration of our connectivity platform, so that’s companies building multi-clouds or hybrid clouds,” Mr Scroggie said.

“The thing to look at is that we forecast that this year we’ll be investing a fraction under $500 million in new development. That’s an insight into how big these opportunities are that we’ll be supporting.”

On the back of the result, NEXTDC’s share price jumped almost 3 per cent in opening trade, but by midday it was down 2 per cent to $7.20. Despite this, the company is still trading up more than 57 per cent compared to 12 months ago.

Mr Scroggie said he believed that Moore’s Law – about computing power doubling every year – was still relevant, although it had shifted from the central processing unit (CPU) to the graphics processing unit (GPU).

“How that translates to data centres is that there is much more computing, but in a smaller space,” he said.

“We have a clear vision ultimately – we want to enhance the advancement of technology and we want to help customers harness the digital age.”