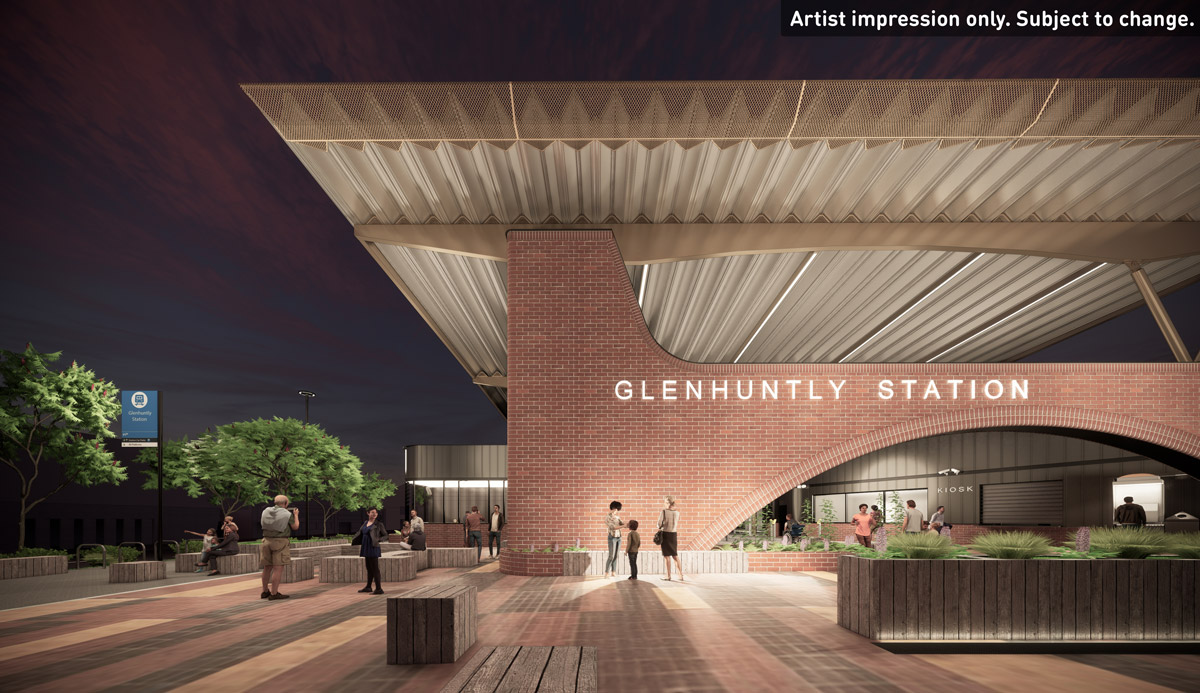 The new station will have forecourt seating, open space and landscaping – artist impression, subject to change.

In April this year, the $507 million contract was awarded to an alliance between Acciona, Coleman Rail, Metro Trains Melbourne and LXRP to remove the level crossings at Neerim Road and Glen Huntly Road and to build a new station at Glenhuntly, as well as pedestrian and cycle paths between Ormond and Caulfield.

These two boom gates can be down for around 60% of the morning peak, when up to 40 trains run on the Frankston line.   The rail line will be lowered into a trench approximately 1 km in length with 2 road bridges.

Designs for the new station have now been released, reflecting the extensive community feedback that has been been sought over the last 6 months.  The station will be contemporary and will reflect the community’s desire that it incorporates materials that complement the local architecture, such as bricks, bluestone and light-coloured granite.

Also included in the project are:

This project has been fast-tracked to start in 2022, with the whole project to finish in 2024, a year earlier than planned.

A unique feature at Glen Huntly is one of Melbourne’s last remaining tram squares, and the manually operated level crossing requires trains to slow considerably – often delaying the more than 200 trams that pass through daily.

Once the boom gates are gone for good in 2023, the Frankston line will be level crossing free between Flinders Street and Moorabbin Station.

The Level Crossing Removal Project  has already removed 46 dangerous and congested level crossings and is well on track to remove 75 by 2025 – with one being removed every four weeks on average this year.