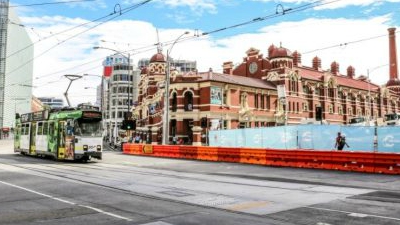 THE $11 BILLION METRO TUNNEL WILL FREE UP MELBOURNE’S BIGGEST BOTTLENECK BY RUNNING THREE OF OUR BUSIEST TRAIN LINES THROUGH A NEW TUNNEL.
Twin nine-kilometre tunnels will deliver a new dedicated pathway through the heart of the city for Melbourne’s busiest rail lines creating space for more trains to run more often across Melbourne’s rail network.

The Metro Tunnel will create a new end-to-end rail line from Sunbury in the west to Cranbourne/Pakenham in the south-east with high capacity trains and five new underground stations.

As a result capacity will be created on the network to enable 39000 more passengers to use the rail system during each peak period.

The Metro Tunnel is the first step towards a ‘metro-style’ rail network for Melbourne with the ‘turn up and go’ train services that are the hallmark of the world’s great cities such as London New York Hong Kong and Singapore.