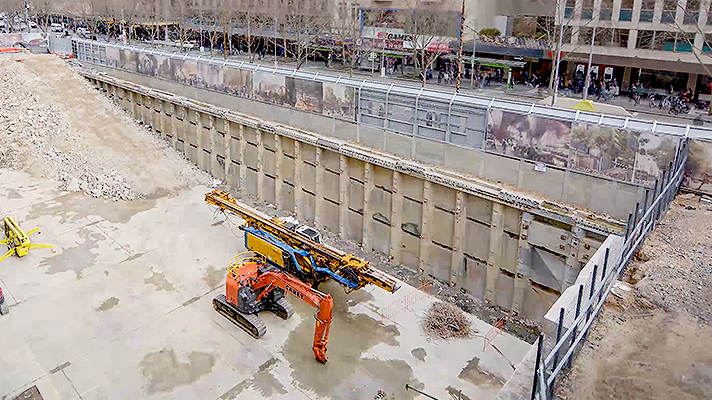 Metro Tunnel works in City Square are entering the next phase, with piling to get underway to build the new Town Hall Station up to 35 metres beneath Melbourne’s CBD.

The Metro Tunnel won’t just deliver a world-class public transport network, it’s also creating thousands of local jobs through initiatives such as the Labor Government’s Major Project Skills Guarantee which has already given the careers of more than 1,200 apprentices, trainees and engineering cadets a kick start.

Over the coming months, Victorians will be able to watch from the viewing windows on Swanston Street as scores of workers and construction equipment, bore huge support columns into the ground. This will allow deeper digging to safely commence, with Town Hall Station to be built within the excavated space.

Piling works will take place in the massive shaft created by the demolition of the three-storey car park beneath City Square and subsequent removal of around 5,000 tonnes of debris from the site. An acoustic shed will be erected over the City Square site early next year, before 24-hour excavation and tunnelling works commence.

Town Hall Station will be located under Swanston Street, between Flinders Street and Collins Street. The station will include an underground passenger connection to the platforms at Flinders Street Station, allowing commuters to conveniently interchange between Metro Tunnel and City Loop train services.