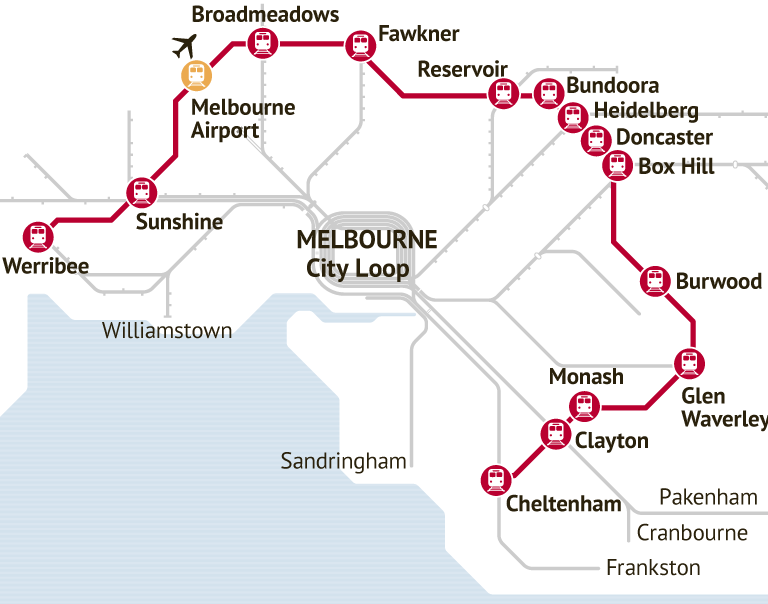 Commuters in Melbourne’s west could get the short end of the stick under Labor’s proposed $50 billion suburban rail loop, research suggests.

The massive underground suburban rail network linking every major rail line in Melbourne and the new airport rail link has been billed by the Andrews government as the “biggest public transport project in Australian history”.

But while it could serve more than 195,000 commuters in Melbourne’s south-east, it may benefit only about 51,000 people in the west, leading planning and economics firm SGS says.

The 90 kilometres of track would connect 10 train lines from Cheltenham in the east to Werribee in the west and is expected to take until 2050 to complete.

The project has been independently assessed by SGS Economics and Planning, which says more train stations need to be added to the rail line in the fast-growing western suburbs.

More stations are needed between Melbourne Airport and Werribee to get true value for money from the project, the economists say.

From Melbourne Airport, the proposed line would travel 34 kilometres and connect to two existing stations – Sunshine and Werribee.

The rail line linking Cheltenham and Box Hill in the east would be 10 kilometres shorter, but would include double the number of stops.

The government is planning to build six new train stations along the new track east of the CBD.

Due to the lack of stations in the west, only 51,000 people would use that section of the rail loop, the research finds.

That’s about one-quarter of the 195,000 people expected to use the track in the south-eastern suburbs.

“I think the west needs more train stations and this current proposal doesn’t do that. It just gives it more capacity for existing rail lines,” SGS economist Terry Rawnsley said.

A key advantage of connecting Sunshine and Werribee on the loop is that it would free up rail lines from Werribee and Geelong and boost the number of services, Mr Rawnsley said.

He said building Melbourne Metro 2 – an underground rail line linking Clifton Hill, the CBD and Fishermans Bend – would also increase services on these lines, but would have the added advantage of linking to Fishermans Bend.

“Metro 2 would give you connections to Werribee, plus Newport and station access into Fishermans Bend, so there are more stations in that option,” he said.

“I’m not sure what the western section is trying to do … part of it looks like the airport link then there’s a big long tunnel to Werribee.

“It is unclear if the western section presents a value-for-money solution to the transport problem faced by the west,” Mr Rawnsley’s report says.

Premier Daniel Andrews unveiled his rail plan on Facebook three months out from the state election, catching the transport bureaucracy by surprise.

The government plans to build the rail line in stages, and Mr Rawnsley backed a decision to build the south-eastern link between Cheltenham and Box Hill first.

But he warned the north-eastern section of rail connecting Doncaster and Broadmeadows – the longest part at nearly 35 kilometres – would be costly and difficult to build.

Tunnelling beneath Doncaster Hill and the Yarra River could prove challenging, whereas a rail link along the Eastern Freeway would have been more straightforward, he said.

Mr Rawnsley questioned why the route included stops at Fawkner and Reservoir rather than stations further south in more built-up areas, such as Coburg and Bell stations.

A government spokesperson said the initial plans released identify “potential stations” and their final location was yet to be confirmed.

“Victorians living out west will benefit from the suburban rail loop, which will create a super-hub at Sunshine connecting to new stations at Monash, La Trobe, Deakin and jobs precincts,” the spokesperson said.

“The Sunshine hub will also provide a direct connection to the airport.”