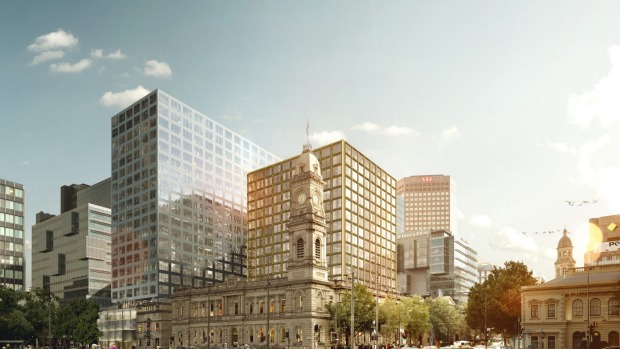 Hotel giant Marriott International has strengthened its grip on Australia’s luxury hotel sector, after striking a deal with developer Greaton Group to bring its flagship five-star Westin brand to Adelaide by 2022.

The 285-room Westin Adelaide, with an end value of $200 million, will form part of a 15-storey tower that will emerge from Greaton’s reworking of the historic Adelaide GPO building at 141-159 King William Street.

Adelaide-based Greaton Group, which is also the developer of Marriott’s W Hotel at the Ribbon project at Sydney’s Darling Harbour, acquired the King William Street site 18 months ago.

“We are thrilled to partner with Marriott International to deliver a five-star wellness experience to the city of Adelaide,” said Greaton managing director Nicho Teng.

Following its 2016 merger with Starwood Hotels & Resorts to create the world’s biggest hotel operator, Marriott has embarked on a big hotel expansion program in Australia with a big focus on capitalising on the growing numbers of wealthy Chinese tourists coming to Australia every year. It aims to operate 50 hotels in the Pacific by 2020.

Marriott now accounts for two-thirds of the new room supply in the luxury space through Ritz-Carlton’s Westins, W and Sheraton hotels opening in all the major capital cities.

Most recently, the 312-room W Brisbane developed by the Shayer Group hotel opened in June, following the opening in April of the 386-room Westin Perth developed by the Buckeridge family’s BGC Group, which is now up for sale.

The 297-room Four Points by Sheraton at Sydney’s Central Park development has been bought by hotel tycoon Jerry Schwartz and will open in August with the 286-room Westin Brisbane, developed by Sam Chong to open in November.

Also under development are Ritz-Carlton hotels in Perth and Melbourne, a W hotel in Melbourne as part of CBus Property’s Collins Arch and recently approved 220 room Westin Coolum Resort & Spa.

“The brand is enjoying phenomenal growth across Australia, where it has developed a loyal following thanks to its unique positioning around wellness,” he said.

Adelaide has been a strengthening hotel market of late with occupancy rates above 80 per cent according to research house STR. In recent years, it has attracted a number of new hotels to the CBD including most recently Intercontinental Hotels Group (IHG) announcing plans to bring the Crowne Plaza hotel brand back to Adelaide.

The new hotel will include three dining venues, a fitness studio, outdoor swimming pool and spa as well as 310 square meters of meeting and event space.

Alongside the new hotel, Charter Hall is developing a new $250 million office tower that will host mining giant BHP.