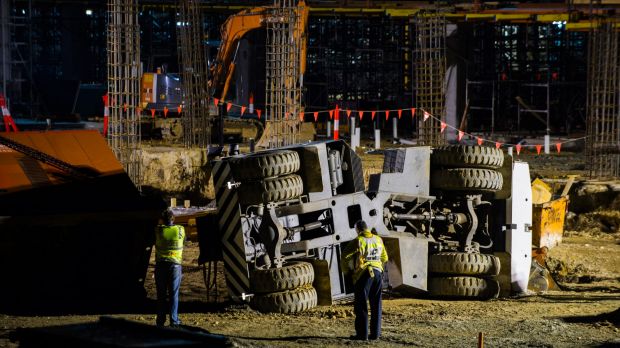 The nine charges, which include a criminal count of manslaughter against a crane driver and workplace charges against company bosses, have been labelled an “extensive and unprecedented” response by ACT’s work safety watchdog.

Herman Holtz, 62, was killed on August 4, 2016, after an incident involving a mobile crane on the University of Canberra Hospital construction site in Bruce.

The crane driver, who was moving an 11-tonne generator at the time of the incident, has been charged with Mr Holtz’s manslaughter.

Reckless conduct charges have also been laid against the crane driver’s employer, subcontractor RAR Cranes, and its crane dogman, along with principal contractor Multiplex, its site manager, site supervisor and site safety officer.

Multiplex’s chief executive and RAR Cranes’ managing director face charges of failure to comply with a health and safety duty.

WorkSafe ACT commissioner Greg Jones said the evidence suggested there were significant and systemic failures on the site, with workers’ safety not taken into account.

“It is alleged that a number of people made several very poor decisions, repeatedly over a period of time, in undertaking that lift,” Mr Jones said.

“The evidence gathered under this investigation suggests that the risk of serious injury or death in what they were doing was obvious and readily apparent.

“However, despite the risks, they continued in their task which resulted in the mobile crane exceeding its design capabilities to such a degree that it overturned with tragic consequences.

“Based on the evidence obtained in relation to the circumstances surrounding this incident that resulted in the death of a person, a strong regulatory response is required and has been provided.”

Mr Jones said that the range of charges reflected the shared responsibilities under the Work Health and Safety Act, from the boardroom to the workers conducting the activity.

“All workers, employers, their directors and managers, both on-site and in the office, must ensure that safety is the number one priority,” he said.

In a statement, Multiplex said the company was doing everything it could to support Mr Holtz’s family and colleagues.

“The welfare of our thousands of employees, subcontractors and suppliers is always our priority, and this fatality was a devastating event given our long history of working safely across a large workbook of projects in Australia,” the statement said.

“Given this matter is now before the courts, it would be inappropriate to comment further.”

RAR Cranes director Geoff Rumble said the company had not yet decided how it would plead.

“I’m not in a position to comment further at the moment,” Mr Rumble said.

“We haven’t even got the brief of evidence.”

Canberra’s union representatives said the charges showed that chief executives and construction industry employers could not get away with disregarding safety.

There were more than 600 serious injuries in the Canberra construction sector in 2016, the year of the fatality, the statement said.

“Construction workers are forced to work unsafely through economic fear over losing their jobs, and the failure of employers to provide a safe environment,” Mr O’Mara said.

“When construction companies cut corners to save time and money, construction workers pay with their lives and livelihoods.

“It is an ongoing tragedy that construction workers are often put in a no-win situation of being either forced to work unsafely, or speak up and lose their job.”

UnionsACT secretary Alex White welcomed the charges against the companies and applauded WorkSafe for taking a strong stance in the prosecuting safety law violations.

Master Builders ACT chief executive Michael Hopkins said the charges highlighted the shared responsibility of everyone in the industry, from employers to workers, to continue to improve the industry’s safety culture and outcomes.

The matters are expected to come before the court next month.