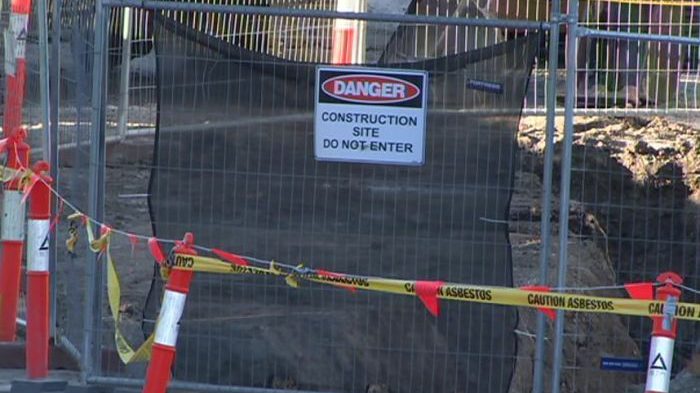 Work on a section of the Hoddle Street upgrade construction project has been shut down after the discovery of a small amount of asbestos, VicRoads said.

The asbestos was found near Studley Street, close to Collingwood College and the public housing flats, on Monday night and is likely from old sewers and underground water pipes.

VicRoads said work would not resume until the location had been made safe.

However, it said the amount of asbestos was small and there was “no health or safety risk to pedestrians, local residents or people living or driving on the busy road”.

“The affected area has been contained with exclusion zones set up to ensure the safety of the community and workers on site,” VicRoads said in a statement.

“All relevant safety procedures have been put in place and qualified hygienists are now supervising works in the area.”

WorkSafe has also been notified.

It is understood there will be additional soil testing before there are any further excavations at the site.

The works are part of the Streamlining Hoddle Street project where a third lane is being added to allow vehicles to get onto the freeway and improve the traffic flow.

There will also be a dedicated bus lane from Victoria Street to the Eastern Freeway.

The works also include intersection upgrades that will give longer green lights to people travelling straight along Hoddle Street and Punt Road.

Last week, work on part of the $11-billion Metro Tunnel rail project was suspended after workers discovered an asbestos pipe while digging up part of St Kilda Road.