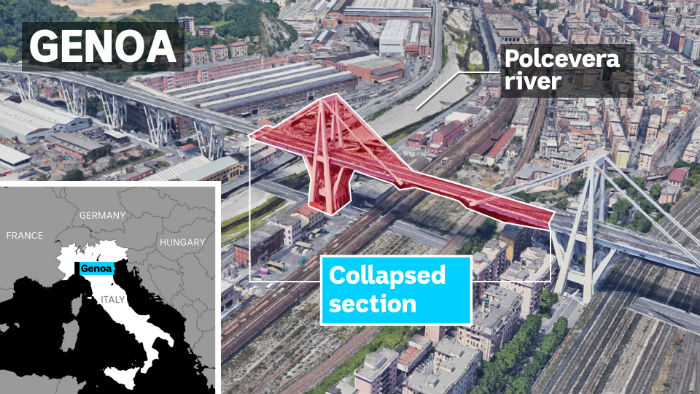 Dozens of people were killed in Tuesday’s collapse, with rescue workers toiling for a third day in hopes of finding survivors trapped under the rubble of the collapsed bridge.

While the official death toll from the collapse has been lowered to 38 from 39, Interior Minister Matteo Salvini told reporters that “unfortunately, the toll will increase, that’s inevitable”.

Mr Salvini declined to cite a number of the missing, saying that would be “supposition,” but separately Genoa Chief Prosecutor Francesco Cozzi told reporters there could be between 10 and 20 people still buried under the rubble.

Sonia Noci, a spokeswoman for Genoa firefighters, said “the search and rescue operations will continue until we find all those people that are listed as missing”.

“We can keep going for another 48 hours in the hope of still being able to find someone,” said Pietro Cosola, technical director overseeing the removal of rubble.

Italy is planning a state funeral for the dead in the port city on Saturday, which will be marked as a day of national mourning.

The service will be held in a pavilion on the industrial city’s fair grounds and led by Genoa’s archbishop, Cardinal Angelo Bagnasco.

Italian President Sergio Mattarella has said the collapse is an “absurd” catastrophe that has stricken the entire nation.

Returning to the scene for the first time since the collapse, limping truck driver Luciano Goccia said he is alive thanks to a miracle after being blown backwards several metres as he passed under the motorway

Mr Goccia said he had opened his truck door to get out when he was under the bridge and heard a huge explosion.

As he turned he was hit by a blast of air and was thrown backwards several metres before hitting a wall, he said.

With his arm in a sling, Mr Goccia said he felt amazingly well considering what he had been through and that the blast of air had actually saved his life pushing him away from the area where debris had fallen.

Examining his completely destroyed truck that had been recovered from the debris of the ruined bridge, Mr Goccia said he still found it difficult to look at it and see what he had been able to survive

Mr Cozzi said the investigation into the cause of the collapse is focusing on possible inadequate maintenance of the 1967 Morandi Bridge or possible design flaws.

What caused the Genoa bridge collapse?

The government has rounded on Autostrade, saying it could revoke its concession as it had failed to ensure the viaduct’s safety, though investigators have yet to identify the exact cause of the collapse.

Under the terms of the concession Autostrade can be fined up to 150 million euros.