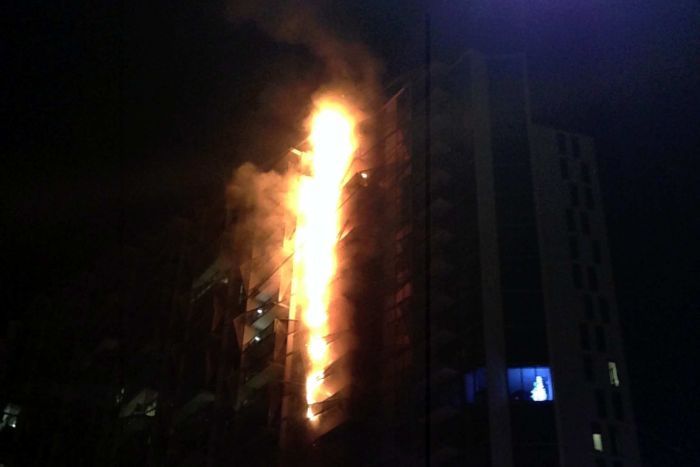 Lawyers are preparing a class action against construction companies who have installed dangerous combustible cladding on buildings, in a move a Melbourne law firm has dubbed a “Goliath versus Goliath” battle.

“Residents are, or should be, in fear but they don’t have a solution.”

Combustible cladding has been a major concern for the building industry and the State Government since fire rapidly spread up Docklands’ Lacrosse building in 2014 and the London Grenfell disaster led to 71 deaths last year.

The Victorian Building Authority (VBA) and local councils have been physically auditing buildings after a taskforce found 1,400 properties “likely” had the material.

But the audits do not force builders to replace combustible cladding, leaving it up to residents to take lengthy and expensive legal action to get their buildings fixed.

“[Residents] have been thrown under the bus or thrown into the fire … in having to deal with this themselves,” Mr Burstyner said.

“Because we have … greater power against a major construction business, it increases the chance of being able to settle.”

Building inspection company Roscon has teamed up with the law firm to help prepare for the legal action, saying the situation in Victoria had left residents with no other choice.

“We see this as the only way forward,” Roscon general manager Sahil Bhasin said.

“We’ve tried with builders numerous times in a civilised way to try and get some rectification works on non-compliant cladding, which hasn’t worked thus far.”

Building warranties in Victoria are guaranteed for 10 years, but construction companies often fight to avoid rectification works, claiming faults identified are not defects.

In December last year, the Supreme Court ruled that the VBA could not force construction companies to undertake rectification works after an occupancy permit had been issued.

The cladding audit has already led to several building orders being issued around Melbourne.

“These building orders are landing on our desks every day to try and assist owners corporations,” Mr Bhasin said.

“It involves spending tens of thousands of dollars to start off with on reports, and after reports have been obtained, they need to spend money on removal and rectification, which is not what we think owners should pay for.”

Lawyers said the legal action would likely pool residents into groups of people affected by the same construction companies.

Adley Burstyner said the action would be on a “no win, no fee” basis.