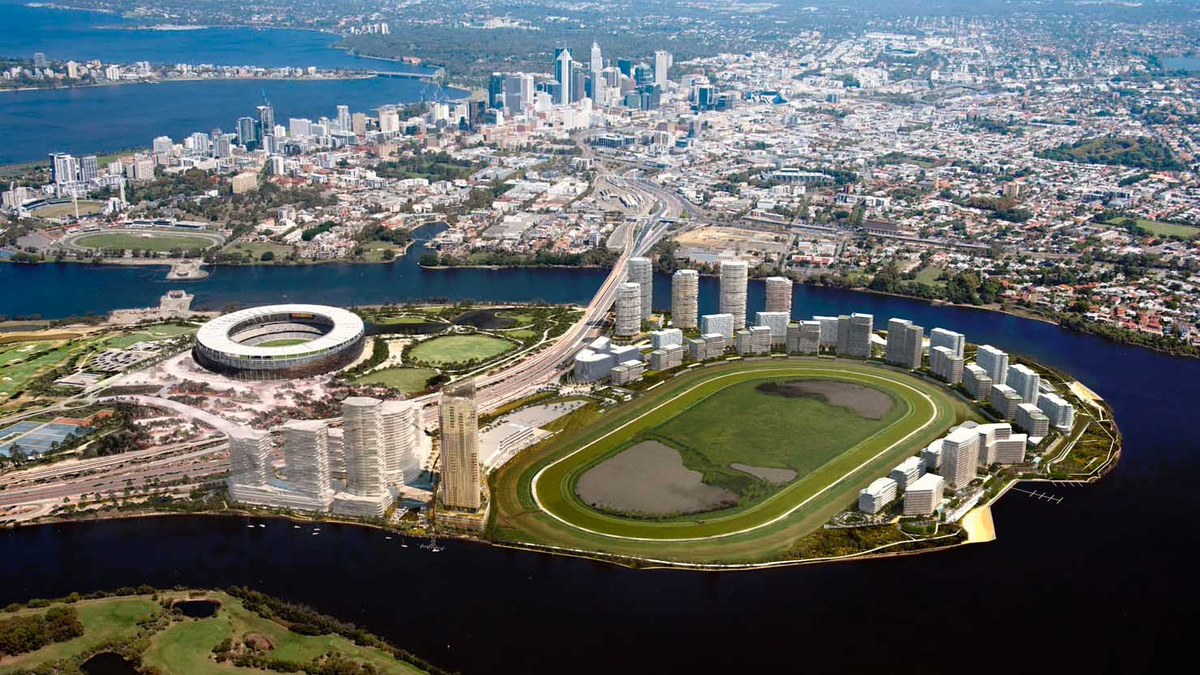 A $3.8 billion apartment and mixed-use development is set to transform the area surrounding Belmont Park racecourse, which sits adjacent to the newly opened stadium on Burswood Peninsula, three kilometres from Perth’s CBD.

WA premier Mark McGowan broke ground at a ceremony on 1 May after developer Golden Group confirmed it would press forward with the project, seven years after the plan was first unveiled as a joint venture with Perth Racing.

“The redevelopment of Belmont Park is the next stage in reinforcing Perth as a truly great city,” said Hassell principal Peter Lee. “It will be a hub of activity providing entertainment, cultural and recreational opportunities, sensitively linking the public domain to a restored Swan River.”

Golden Group managing director Andrew Sugiaputra said the development will be a “local and connected community” suitable for a range of demographics, including families.

“As well as all the advantages that come with being connected to the city, river and events precinct, Belmont Park residents [will] have access to outdoor play spaces, a high-quality parkland setting, and easy access to great recreation, cafes, a grocery store and child care facilities,” he said.

Currently no development applications have been considered for the project, but a spokesperson for the developer said a DA for the first two towers would be submitted by July. Those two towers are to be designed by Hassell.

Golden Group’s Andrew Sugiaputra has indicated that the project has been ready to go since 2015, but conditions in the WA economy had changed. Now, with the completion of the new 60,000-seat stadium and a nearby railway station, the viability of the project has improved.

The proposed development will be in close proximity to the new Perth Stadium station on Burswood Peninsula. While the train line currently only runs on days when an event is being held at the stadium, the premier has confirmed to media that it will eventually run daily.

“This precinct will benefit enormously from the public transport network already in place and as the community grows, it will benefit from easy connections to other metropolitan precincts and urban centres,” said McGowan.

Over the course of the project five distinct precincts will be created as part of what Golden Group describes as a “city-defining” development. Construction of the two Hassell-designed towers is slated to begin early next year.