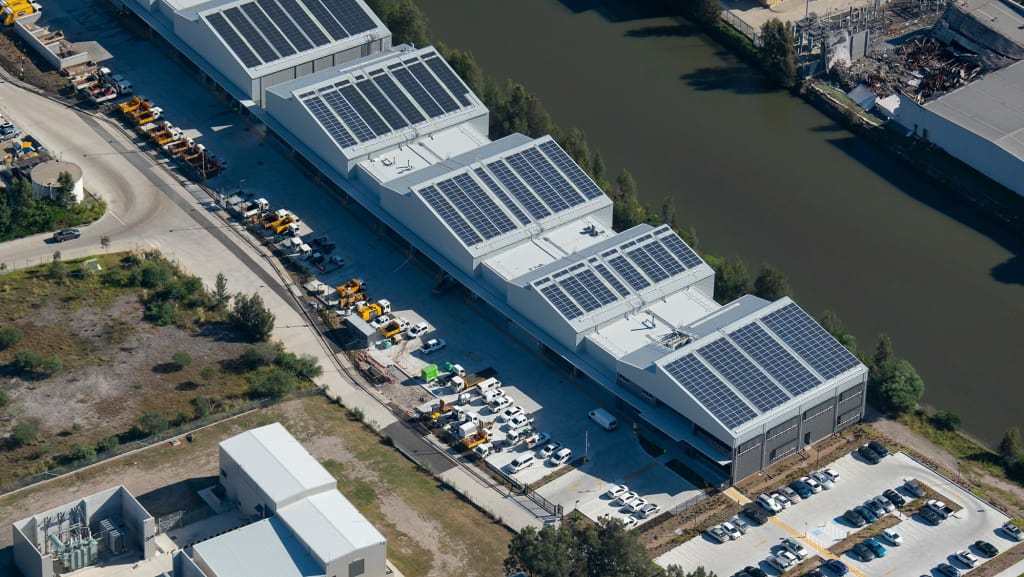 Lord mayor Clover Moore’s plan to make half of Sydney’s power come from renewable energy has been supercharged by the launch of the city’s first industrial-sized battery and solar installation.

Ms Moore opened the Alexandra Canal transport depot on Wednesday, which is powered by about 1600 solar panels and supported by a battery capable of storing 500-kilowatt hours of energy.

While the solar installation isn’t the city’s largest – Sydney Markets in Flemington is powered by nearly 8600 solar panels – this is the first to combine solar with large-scale batteries similar to Tesla’s massive battery unit in South Australia.

Ms Moore said the project was part of the city’s wider push towards greater sustainability and fighting climate change.

“Growing the uptake of renewable energy is critical in combating the worst impacts of climate change,” Ms Moore said.

“We’re working towards a target of 50 per cent of all electricity in the City of Sydney area to come from renewables by 2030.

“To help us achieve that target we’re covering the roofs of our properties with as many solar panels as possible. By mid-2021, we expect to have more than 7800 solar panels on the roofs of our properties. As the mix of storage and generation on our electricity grid changes, solar solutions like this could provide reliability and resilience to our electricity network and potentially prevent blackouts,” Ms Moore said.

The solar and battery installation can provide up to 500-kilowatt hours of electricity, which is enough energy to power 50 homes for an entire day. The solar panels and battery will allow the depot to reduce its demand on the grid during peak times while also cutting power costs.

The process of reducing usage during heavy load times is known as demand management and will mean the batteries are remotely managed, in real time, by electricity transmission groupTransGrid.

It is the first installation as part of a wider trial that aims to install 1.5-megawatt hours of battery storage capacity across council buildings in Sydney, as part of a plan to make at least half of the city powered by renewable sources.

She said this installation will allow the depot to be classified as carbon neutral, and save about 600 tonnes in carbon dioxide emissions annually.

TransGrid chief executive Paul Italiano said large-scale batteries, such as the Alexandra installation, will be playing a greater role in the future of Sydney’s electricity network.

“This initiative with the City of Sydney will afford the depot a significant amount of energy self-sufficiency while also sharing benefits with the wider community through the electricity network,” Mr Italiano said.

“By partnering with a site where this service is needed, we can support the City of Sydney’s renewable energy goals and reduce the cost of the council’s depot.”

This is the first Tesla battery to be installed by a government in NSW, following similar installations South Australian and Victorian governments.

Late last year the South Australian government worked with Tesla to install the largest single lithium-ion battery unit in the world. It is 100 megawatts in size and able to provide power to about 30,000 homes.

In Victoria, two batteries will provide a combined energy storage capacity of 80-megawatt hours, which can power 20,000 homes for an hour.

The Grattan Institute’s energy director Tony Wood said there will only be an expansion of this type of technology as Australia develops more renewable generation.

“This is the perfect example of managing fluctuation in demand, as it can provide a very fast response when clouds are over the solar panels or demand levels spike,” Mr Wood said.

“We saw evidence of the large Tesla battery doing exactly this in South Australia over summer.”