Do you have a truck protection gizmo? 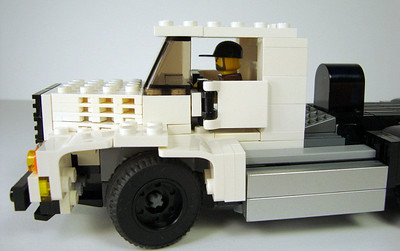 Look carefully and you may start to see strange little metal geometrical gizmos on the back of Amey’s (Amey plc in the UK) highway maintenance vehicles. That’s to stop lorries hitting them.

Forward collision warning (FCW) and automatic emergency braking systems (AEBS) have been mandatory on heavy goods vehicles (HGVs) over 7.5 tonnes since 2015 in the EU. But the technology does not always work perfectly.

After the Dutch Highways Agency investigated why HGVs were still striking highway maintenance vehicles despite having AEBS, an Oxfordshire based company, Moshon Data, developed a fix for the problem.

The research established that unusually shaped vehicles were not detected by the AEBS. So Moshon Data produced its £30 RadViz product which, fixed to the tail of a van, makes it easier for HGV radar sensors to detect.

The RadViz is metal and shaped like a hollowed-out pyramid turned on its side, just 40mm by 80mm. It is designed to increase the radar cross-section (RCS) of the vehicle on which it is mounted and has been developed based on the signal wavelength used by vehicle manufacturer’s radar sensors. Radviz can also be added to static objects including signage or traffic delineators.

After trials, the Dutch agency mandated that all highway maintenance vehicles must have a product of this type fitted to its vehicles.

Now highways contractor Amey is adopting the Radviz in its traffic management operations in the UK.