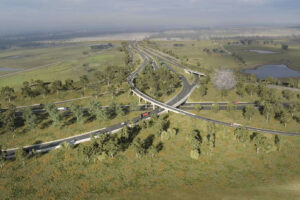 Public consultation is now open for the design and landscape plan for the future of the M12 Motorway in Sydney.

Recommendations from the Darug community in the region helped to influence the initial plans, with Aboriginal design agency Balarinji working with local Aboriginal artists to design an emu-inspired sculpture, which is inspired by the ‘Great Emu in the Sky’ constellation.

73,000 trees will also be planted along the corridor of the M12, which will also include the preservation of wildlife passages in Cosgrove, South, Kemps and Badgerys Creeks.

The M12 is a new 16-kilometre dual-carriageway motorway, linking Western Sydney International (Nancy-Bird Walton) Airport and the Western Parkland City to the Northern Road in the west, and to the M7 in the east via Elizabeth Drive.

On behalf of the Australian and NSW governments, Roads and Maritime Services is planning the M12 Motorway as part of the $3.6 billion Western Sydney Infrastructure Plan. The $2 billion project (funded by by both the Federal and State governments, on an 80:20 basis) is expected to provide improved access to the Western Sydney Aerotropolis, as well as increase road capacity, road safety, freight movement and reduce congestion throughout the community.