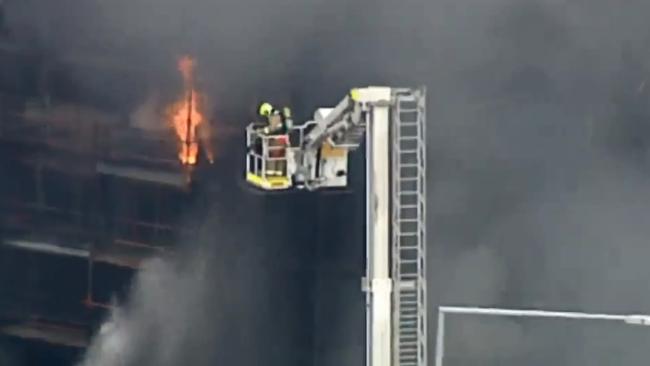 Firefighters are battling a massive blaze at a construction site at busy Circular Quay which broke out just after 9am on Tuesday morning. Nearby buildings and the train station have been evacuated as 13 fire crews attempt to bring the inferno under control. Witnesses report hearing loud explosions.

Fire and Rescue have sent 13 crews to battle the blaze which has completely engulfed the construction site on the corner of Pitt and Alfred streets.

There is a 200 metre exclusion zone around where the building fire is and police have taped off nearby streets.

A Fire and Rescue NSW spokesman said all site workers have been evacuated.

“We have eight crews on scene at the fire which is at a building under construction,” he said.

“There are reports the exterior scaffolding and sheeting is alight, at the moment the response is a third alarm, in addition we also have five crews on the way.

“All people have been evacuated as per the on site supervisor.

“Crews are working and attacking the fire from the outside of the building but there is a lot of smoke in the area.

“Firefighters have established an exclusion zone around the area and it is still an active fire at the moment.”

An ambulance spokesman said: “At this stage 13 people have been assessed and treated for smoke inhalation. But we have not transported anyone to hospital.”

Rossini waitress Jenny-Emilia Seidel, 18, said she heard “three explosions” as the building overlooking her restaurant went up in flames.

“The building was completely on fire and they were trying to put it out when I heard three explosions,” she said.

“This was just after 9am and it was very loud.

“At the moment we are shut because the police told us to close so we don’t know what’s going on.”

Ammette Yazbek was working in the Big Bus company in Circular Quay Station when she noticed people running from the area.

Nearby workers heard a series of explosions.

“A couple of times we’ve heard what sounds like an explosion, but I am not sure if it is part of the building … but there is a strong smell of gas”

“It is affecting George Street and they have made them move.”

“You can still smell the gas but it was really strong before.”

The fire is at the site of the old Gold Fields House building.

The 1960s highrise was bought for a reported $425 million by the Chinese Wanda Group in 2014, and is being demolished to make way for planned $2 billion mixed-use development One Circular Quay that includes a 59-storey apartment building.

Demolition works commenced in late March 2017 by Delta, and are due to finish next month. Construction of One Circular Quay is then scheduled to commence and is due to be completed in late 2021.