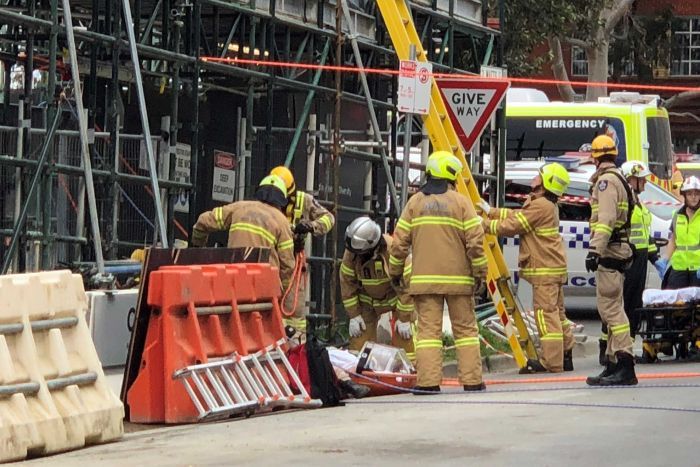 Much later, when he finally climbed down, he covered his face and wept.

A man in his 40s died and another was left clinging to life after a container of concrete fell from the crane at a worksite in Box Hill, in Melbourne’s eastern suburbs, on Thursday.

The pair were submerged and trapped in the wet concrete after the tub fell on top of them.

A third man was also injured.

Forty firefighters, including specialist search and rescue teams, were called to the scene.

“In our industry you don’t often get too many second chances,” Gerry Ayers, the safety boss of the CFMMEU’s Victorian division, said.

“And tragically, that’s been proven again.”

He said seven Victorians had died in workplace accidents across the construction industry since January, and Thursday’s incident should be a wake up call.

“When we come on site and we call for things to be done differently and done safely, that’s the reason,” Dr Ayers said.

“We’re doing it because if we don’t, people end up dying in our industry.”

Workers on the site, including the crane driver, were “incredibly traumatised”, assistant chief fire officer Brendan Angwin said on Thursday.

The company declined to comment when contacted by the ABC.

The union said investigators trying to piece together what happened on Thursday would find an industry that appears to be tightly regulated and has a good track record.

“There are obviously daily checks which the crane operator goes about and checks all the hydraulics and the cables and all of those things,” he said.

In Victoria and in Australia, the crane industry is heavily regulated with several layers of safety protocols in place, according to its peak body.

In addition the daily inspections conducted by cranes operators, who must hold a high-risk work licence, cranes are checked quarterly by maintenance personnel, and annually by independent assessors.

Rigging equipment, including chains, have their own inspection regime and are usually checked daily.

The chains are also bench tested, visually inspected and their degradation recorded.

The Crane Industry Council of Australia, which represents company owners, rigging suppliers and crane manufacturers, said something had gone “awry”.

Its chief executive, Brandon Hitch, said the incident was tragic, but was at pains to point out it was too early to come to any conclusion about what caused the incident.

“There’s a lot of safety built into the industry,” Mr Hitch said.

“Australia is a leader globally in work health and safety and the crane sector is no different.

“While it is tragic, people should find solace in how Australia operates, and I’m saying this as a migrant, [it’s] better than other places in the world.”

On Thursday, the construction union issued an alert to stop using Clark Cranes.

Dr Ayers has also called on WorkSafe to seize the offending crane and undertake a forensic inspection of its operation.

“Because at the moment there would be a question mark hanging over their cranes in terms of their safe operation,” he said.

He has also demanded Clark Cranes do a mechanical inspection of its crane fleet, and urged other companies to do the same.

He called for a more “aggressive” approach to regulation.

“I don’t call these accidents, these are incidents,” he said.

“There are always a number of events leading up to these types of things.

“What we now need to do is try to identify what those events were.

“This industry is going gangbusters, I think we just need to slow down and really take a good hard look at how we’re building and what people are doing, or perhaps what people aren’t doing, just to get the job done.

“It just shouldn’t happen. Not in this day and age.”