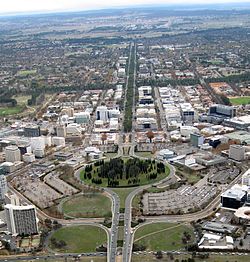 The Australian Capital Territory has announced a massive $5 billion infrastructure program as part of its 2021-22 ACT Budget, to create thousands of jobs and support its economic recovery.

With 250 projects and 14 ongoing programs of work already underway, the largest infrastructure program in the history of the Australian Capital Territory’s public sector will support more than 15,300 construction jobs, and help reach the goal of more than 250,000 jobs in the territory’s economy by 2025.

“Interest rates are the lowest since Federation, providing a once-in-a-century opportunity for the government to build sustainable, productivity-improving and growth-enabling infrastructure to prepare our city for the future.”

Health and wellbeing infrastructure funding of $877 million over five years to 2025-26 will include new funding for projects such as a Cancer Research Centre at the Canberra Hospital, infrastructure upgrades at Calvary Public Hospital, planning for a new carpark at the Canberra Hospital and planning and design for a future hospital in Canberra’s north.

A total of $950 million of funding will be invested in CIT and education infrastructure over the next five years. This helps to ensure that every child has a place at a great local public school and supports a skilled workforce as we recover from the impacts of this crisis.

Over the next five years, infrastructure investment in housing and community support and safety will total $935 million, including over $580 million for public housing growth and renewal.

Funding of $1.4 billion will allow for upgrades to Canberra’s sustainable and connected transport system, upgrades to roads and paths and improvements to active travel routes across the city.

Funding of $8.5 million will be allocated in 2021-22 to upgrade and improve major venues that host major sporting and other events in Canberra.

Funding of $2.9 million over two years will also be allocated for detailed design work for carpark upgrades at Stromlo Forest Park.

Planning and upgrades for new community facilities across Canberra include:

In addition to the $5 billion of investment by the General Government Sector, an additional $1.4 billion will be invested by Public Trading Enterprises over the next five years which will result in a record $1.3 billion in 2021-22 and $6.4 billion over the five years to 2025-26.