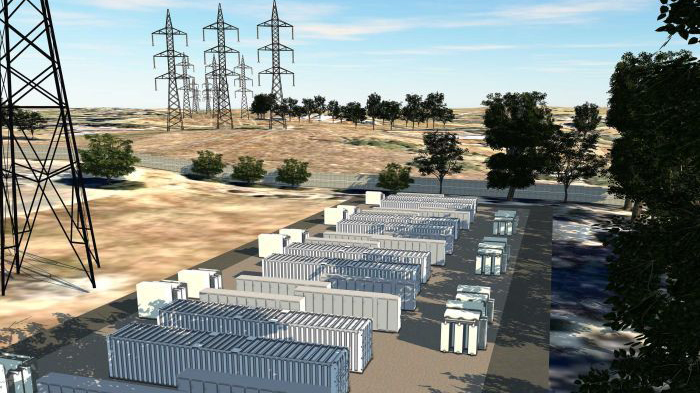 Two large-scale, grid-connected batteries will be installed in regional Victoria, in a bid to shore up the state’s electricity supply.

The projects, worth a combined $50 million, will be funded by the Federal Government, through the Australian Renewable Energy Agency (ARENA) and by the Victorian Government.

“The wind doesn’t blow all the time, and the sun doesn’t shine,” Mr Frydenberg said.

“But people expect a consistent, 24/7 supply of power. These battery projects will be important.”

One battery will be located near the small town of Kerang, in northern Victoria, and will be part of the existing Gannawarra Solar Farm.

It is expected to provide 25 megawatts (MW) of energy, and will have a storage capacity of 50 megawatt hours (MWh).

It will be owned by Edify Energy and supplied by Elon Musk’s Tesla and will be capable of powering 800 homes for 24 hours.

The second battery will be located in Ballarat, and is set to provide 30 MW of energy, and be able to store 30 MWh.

It will be supplied by Fluence and owned by company AusNet.

“The one near Kerang is co-located with a solar farm, and the other at the Ballarat terminal substation.

“[They] will capture the existing investments and support energy generated from renewable projects in the region.”

With construction due to commence this April, it is expected to be online by next summer.

Victorian Energy Minister Lily D’Ambrosio said the project was part of the most sophisticated energy storage initiative in Australia.

“Together with ARENA and leading energy companies, we are investing in energy storage that will help us firm up our supply when we need it,” she said in a statement.

“If you look at the big battery that’s in in South Australia, it’s been performing very effectively in providing all sorts of services …it’s certainly a step in the right direction,” said Professor Michael Brear, the director of the Melbourne Energy Institute at the University of Melbourne.