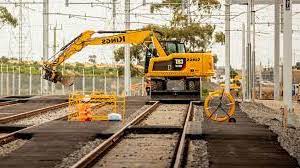 The $3.5 billion is allocated in the Queensland budget for new rail projects over the next four years